It's nice when a new ukulele brand comes my way for review. I am not talking about the flood of cheap rubbish at the bottom end, but a new, decent playable instrument. Thanks to Omega Music in the UK, I have been lucky to have been able to spend some time testing such a uke. The Kremona Coco Tenor. 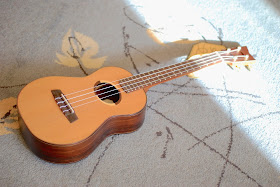 Kremona are an instrument company based in Bulgaria in Eastern Europe, and have actually been making stringed instruments for many years. This though is part of a new range of ukuleles they have brought to the market, and the Coco Tenor represents (I believe) the top of their line. It retails at £349 and is made in Bulgaria. Yes, that's right a move away from the usual China for ukes at this price point.

My readers will know that I am not a huge one for 'bling' but when I first took this out of its box my reaction was 'WOW'.  Perhaps 'bling' is the wrong word, as this isn't actually an overly ostentatious instrument, but it just spoke to me on many levels, and impressed me for being bold enough to change many of the norms that are relied upon by so many manufacturers.

The body is a traditional double bout shape, and is made of solid woods all round. The top is made from solid cedar, and the back and sides are solid Indian Rosewood. The contrast between the light and dark woods is, in my opinion, fantastic. The grain on the top is (typically for cedar) straight and even, the top itself being made of two pieces of wood, nicely book matched. 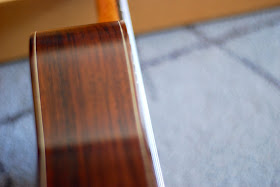 The sides are in a deep rosewood brown with plenty of stripe that is even and parallel with the build. The back is put together by two book matched pieces of the same deep rosewood and looks great. The back has very little arch to it (if any at all) which was a surprise, but we will come on to sound projection and range later on. 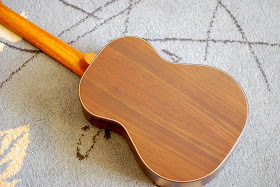 There is decorative binding where the top and back meet the sides, with a  brown white brown stripe showing on the top and back, and also a similar finish on the sides themselves. I think it looks really nice and sets off the darker wood really well. Where the sides meet at the base there is a similar trim.

The whole body is finished in a satin that, like some of the Kalas who employ the same finish, make it look and feel a little artificial. Thankfully though there is enough grain coming through to offset this more than it does on say, the Kala Acacia I reviewed. Finish is generally good, though there are one or two bubble spots and rougher patches. Honestly though, I have seen much, much worse on ukes that cost more money.

I mentioned above that I like manufacturers who do things a little differently and the first thing that strikes you in that regard on the Kremona is that sound hole. It's an oval shape (itself unusual) but is decorated around in quartered segments of inlaid wood (what appear to be rosewood and maple). I think it looks great and will certainly turn heads when you turn up to a jam with one of these. 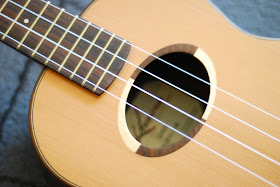 The bridge mounting is also different. It's a standard tie bar bridge but shaped nicely and differently than 99% of ukes you will buy. The saddle appears to be bone or Tusq and is set on an angle. Sadly the bridge seems very low giving little room for manoeuvre if you needed to take the action down. 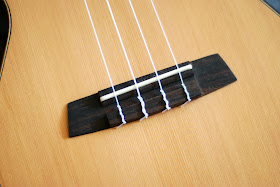 A look inside and all seems neat and tidy. The manufacturer label is hand filled in on the serial number line (I like little touches like this that remind you it was actually built with human intervention!) and the bracing looks nicely shaped (if a little rough around some edges). All tidy generally though.

On to the neck and this is made of mahogany and is in three pieces with a joint at the heel and the headstock. It has a nice profile to it, not too thin and slightly wider at the nut than many tenors - something I prefer and I find helps playability. People often think the scale of the ukulele (i.e. soprano, concert, tenor) dictates fingerboard space, and as such the myth that concerts are easier than sopranos. Whilst this applies to some degree, nut width is a far bigger factor.

The neck is topped with a rosewood fingerboard, which is evenly coloured all over. The fingerboard edges are not rolled, but it remains extremely comfortable in the hand. Outward facing fretboard markers are inlaid in white at the 5th, 7th, 10th and 12th frets. As far as player facing markers go, we have a solitary one at the 7th. Better than none I suppose! 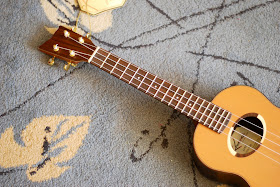 There are 18 nickel silver frets, with 14 to the top of the body and they are on the chunkier side which I like to play. They are really nicely finished on the fret ends, in fact one of the better examples of finish I have seen in this regard.

Past the bone nut (which is nicely applied, nice and low with the strings sitting on the slots, not deep inside them) and the headstock is another highlight. I will always applaud a manufacturer who chooses to go with a headstock shape different from the most common Martin clone shape. This one is kind of offset and looks like a mountain range silhouette.  I really like it. The headstock is faced with rosewood, and the facing plate also has binding detail where it joins the headstock. Another really nice point of detail. 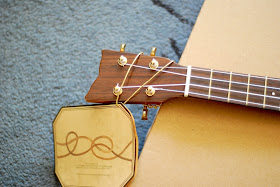 Tuning is provided by open geared tuners in gold. They are unbranded but work perfectly and seem to be of good quality. The buttons are not overly large and suit the scale of the instrument just fine. I personally would have preferred the tuners in silver not gold, and perhaps the pegs in dark rosewood to compliment the back, but I am now nit-picking. (I do think they are a little gaudy though). 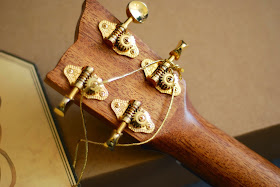 The package is finished off with Aquila strings, what else. I haven't changed them as this uke has to go back to the dealer, but I would be sorely tempted to experiment with strings on this one.

So I think you can probably tell from the description above, that I am really rather taken with how this uke looks, and the little differences that set it apart from the pack. I will go further, I think it looks FABULOUS. As I often say though, looks do not affect tone or playability. The Kremona is doing well so far, but how does it play and sound?

Firstly, the setup is just fine for my tastes. Thankfully the action at the bridge is acceptable as if it was high I may struggle to take it down much more. The action at the nut and the general finish is excellent and one of the best nut finishes I have seen outside bespoke ukulele builds.

To hold, the instrument is comfortable. It actually feels a little body heavy which is no bad thing, although if this was mine I would fit a strap button for performances anyway. The satin finish makes it a very tactile thing to hold though and the neck comfort is better than most instruments I have played at this price point. 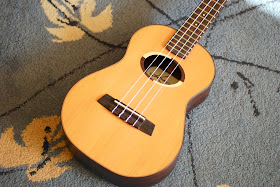 Volume wise, well, it has bags of it. A really good projection, and when strummed or plucked hard it can really shout the volume out when needed. Played quietly though it is surprising how easy it is to get a clear tone out of it, so it clearly has a great range.

Strummed and there is great separation between the strings, and chords ring very accurately all over the neck. It doesn't quite have the complex harmonics and chime of some higher end instruments, but compared to a lot of Kalas I have played in this price range, the Kremona excels. Sustain seems to be a little shorter on strumming compared to picking though. Nothing overly short, but to my style of playing and my ears, this instrument seems slightly better suited to fingerpicking than plain strumming. I don't think that is a bad thing. Also bear in mind the Aquila strings. I am not a fan, and sustain when strumming will, I suspect, be improved with a string change to fluorocarbons.

Playability is helped by that really nice neck and nut width. I found it very easy to play with no issues of bumping fingers or lack of space when hammering on more complex chord shapes, even on the lower frets. It feels very natural and intuitive to play and that is, in my experience, the mark of a very playable instrument. To date only a couple of other ukes have given me that feeling and they both cost considerably more than this one.

So in short, I think this is a winner. I was immediately taken by the fact that the build features a number of elements that make it stand out from a crowd that is increasing in size. It's a head turner for sure, but I am particularly pleased that the playability and tone do not let it down. That would have been a real shame.

Recommended, and be sure to check out the video review below. Thanks again to Matt at Omega for the loan. 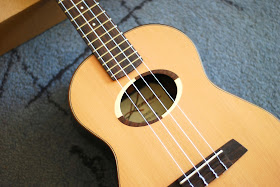 Looks - all sorts of details and features that are unique
Neck finish, nut, frets, width - all wonderful
The contrast between that top and the back
A move away from China


To understand my review scoring and see this result in context - visit my review page at
http://www.gotaukulele.com/p/ukulele-reviews.html